I feel like Hulk comics are almost always hit or miss with readers. For example, one of the more recent runs from Marvel’s Legacy event featured an Incredible Hulk featuring Amadeus Cho as the comic’s main protagonist (and Hulk). Although most can probably agree that Banner is the more interesting Hulk, some still liked Cho due to the character promoting diversity within comics, or they simply enjoyed a fresh version of the Hulk. Then, there were the large, swarming masses that demanded Banner be brought back. Now, I’m not trying to say Cho is a terrible character, or that his run as the Hulk was god awful, but what I am trying to say is that Hulk comics are either great or horrible in the eyes of the general fan base. Cho’s comics weren’t the only Hulk comics to be viewed as bad by an overwhelming amount of readers, and it certainly won’t be the last. In fact, some readers will make the claim that Hulk comics have been terrible reads for the last several years except for a few select titles and runs, but regardless of your thoughts on that, the future for Hulk certainly looks bright.

Oh, Immortal Hulk, my new love and favorite comic to read, or old now, I guess. Yes, Ewing’s run is sadly coming to an end in a handful of months, and the comic I love and swear by will slowly become a thing of the past. For many, it was a comic that brought Hulk out of a slump, both reinventing and revolutionizing the character. For others, it was a run that simply brought back some of Hulk’s old, forgotten trademarks that mixed the character with horror, and for me, it was simply a comic that got me into Hulk, serving as a starting point for a rather deep dive into the character. I just don’t know how to explain this one without using the words “read it yourself” because of how different it is from other comics currently on the shelves. Every character is grotesque, every story grueling, and every panel Bennet draws induces goosebumps. Then, seeing classic characters such a Xemnu, Rick Jones, and the Leader done in such a horrific, troubling way with disgustingly awesome forms is something any reader would be both shocked and entertained by. Oh yeah, and the Immortal Hulk is a Hulk that only comes out at night and wishes to conquer the world if that makes it any better.

Alright, you get it: Immortal Hulk is awesome and a story you could claim to be Hulk’s greatest comic, with heavy hitters such as Planet Hulk, World War Hulk, and Future Imperfect being some of the few contestants capable of lining up to Ewing’s historic run, but what about the rest? Well, perhaps an underrated comic slowly making tremors in everyone’s pool is the recent Maestro limited series. A bit unorthodox, two limited series have been released with the first leading directly into the other after a few months in between. Then, a third titled World War M plans to release later this year (2021) and has been teasing the reveal of a future version of Abomination. I don’t know how many people have actually been reading these comics, but they’ve been solid so far, with good writing from Peter David accompanied by artwork from German Peralta and Javier Pina. Essentially, these titles take place after the collapse of our modern society and without heroes. Then, there’s Banner, who wakes up in a test tube, seeing what has happened to the world himself and many of his close friends have failed to protect. So, Banner essentially decides that humanity is incapable of surviving on its own- and it’s up to him to lead- or dictate- humans into the even further future.

What makes these comics tick is David’s unrelenting ability to convey Banner’s intelligence, having the character construct cybernetic hounds while outsmarting characters on every level (such as M.O.D.O.K.) and the Maestro’s chess match against Dr. Doom. Then, there are the moments where “Hulk” is let out, battling Hercules to the death and dismantling the Pantheon. It’s fun to see both of Bruce’s personalities exist in their own way and even collide in interests as readers are gifted with classic “I’m the strongest there is” speeches and differing ideals between Banner and Maestro. What makes the story even better is to know there’s even more coming down the line featuring Maestro, Doom, and a version of Abomination (maybe), but again, who’s actually reading this? I don’t know, but from what I’ve seen and read, regardless of who has been following these titles, they’re incredibly good, smooth reads.

Long story short, comic readers have two Hulk comics that are great reads, but what’s with all the nonsense about a “new era of Hulk comics” in the title? Well, it comes down to the next chapter with World War M and continues with a new Hulk run from Donny Cates dropping later this year (2021). We’ve been given some glimpses of panels from artist Ryan Ottley, and I have to say, this comic looks like it’s going to be amazing. Sure, it might just be the initial hype of seeing the panels and learning that the ever-consistent Cates is taking over one of Marvel’s heaviest hitters, but I don’t care much. This is a situation Cates is comfortable in, killing Thor (and Venom) lately, taking the torch from Jason Aaron after the conclusion of Aaron’s several-year-long rampage across the industry with Thor at his side. Now, Cates is picking up Mean-Green after the conclusion of Ewing’s historic run, giving Cates another opportunity to prove he’s capable of running with some of the industry’s biggest talents. Just saying, if Cates nails this (and I think he will), we’ll be gifted with some amazing Hulk comics for years to come, turning into perhaps the best era in Hulk comics ever, or I could be wrong, and Cates could flop (he won’t though).

Image of a future Abomination from Maestro: War and Pax #5

Cowboy Bebop: Spike and a Ship-Load of Unused Potential

Black, White, and Blood: Are They Worth Reading?

Heroes Reborn: Man, Do We Have A Mess Of A Reality On Our Hands

The thing none of you will ever understand is that there are no sides. There’s no heroes or villains. There’s just what I want and how I’ll get it. 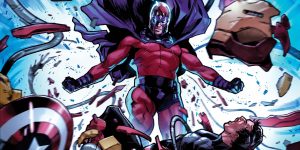